Tuesday and the final Meeting today, 26th October 2017, of the Holy Synod of the Hierarchs of the Apostolic Throne of Alexandria presided over His Beatitude Theodoros II, Pope and Patriarch of Alexandria and All Africa.
Before the start, a Divine Liturgy was served at the Patriarchal Chapel of Ss Theodori. The Sacrament of the Divine Eucharist was served by Metropolitan Dimitrios of Irinopolis, who celebrated his name day. At the end of the Divine Liturgy, the Alexandrian Primate wished Metropolitan Dimitrios the very best on his name day.
After the regular prayer, the Deliberations began and before them, His Beatitude mentioned in gratitude: a) The absent Elder Metropolitan Petros of Aksum, for his many years and multifaceted ministry in the ancient Patriarchate of Alexandria and prayed for a long life for him and the completion of his writings, which will be another contribution to the recording of the multidimensional history of the Throne of St mark. b) He also mentioned His Eminence Metropolitan Ignatios of Pentapolis, who is ill, and who is in hospital, praying for his health underlining his self-sacrificial contribution over many years, in the historic bastions of Orthodox Mission in the Democratic Republic of the Congo as a Metropolitan, but also as a Priest and as a Retiree (but never resting) in the Kananga region.

Thereafter, His Beatitude the Patriarch laid before the Body of Hierarchs the proposal that, due to the particular political problems, the country of Eritrea should be placed in the ecclesiastical jurisdiction of the Holy Metropolis of Nubia, and that His Eminence Savvas, Metropolitan of Nubia be called “Metropolitan of Nubia, Most Honoured and Exarch of All Sudan and Eritrea”.
The Hierarchs accepted and voted on the proposal of His Beatitude. The Primate wished the Metropolitans Seraphim of Zimbabwe and Angola and Alexandros of Nigeria on the completion of twenty years since their election and ordination, that their year of their multiform and productive ministry may be many, to the glory of God.
The Plenary Session of the Holy Synod followed, with a speech by His Eminence Seraphim, Metropolitan of Zimbabwe and Angola, on the topic: "The Course of Theological Dialogues and Their Perspectives", in which His Eminence developed briefly the history of theological dialogues with Roman Catholics, Anglicans, Lutherans, etc. He also highlighted the individual problems and the problems of these dialogues, as well as those issues where no common stance has been found, with the result that they have stopped or require more time from one side in order to be able to continue.
During the speech as well as at the end, His Eminence Seraphim replied and clarified many details and a multipage supporting text was distributed. Concluding its deliberations, the Holy Synod of the Patriarchate of Alexandria thanked the All-merciful and Providential Lord, for the inspiration of the Holy Spirit in its efforts, and His Beatitude for his wise counsel and constant care for all of the local Churches in Africa, to the glory of the Father and of the Son and of the Holy Spirit. Amen.
http://www.patriarchateofalexandria.com/index.php?module=news&action=details&id=1332#prettyPhoto
Αναρτήθηκε από trygetes στις 6:50 π.μ. Δεν υπάρχουν σχόλια:

After 4 years of fundraising the first of many young Students move into the NEW Orthodox CHRISTian School in Waterloo Sierra Leone.

"Divine Liturgy at St.Antony Ichamara today. A fundraising followed to suppprt the needs of the priest immediately after liturgy. It is good to see the faithful rise up to offer solution to this spiritual challenge in our ministry."

I love being Or†hodox
"Kindly help us raise awareness about St Barnabas orphanage and school in Kenya. This week has been dedicated to St Barnabas by the board, volunteers and all missions at Orthodox Africa.
Please share this link
Orthodoxmissionkenya.org/news
with as many people as you can....
Through profiles, groups and your pages. Consider also sending messages to your friends and family about St Barnabas orphanage and school. God bless you.
Hopefully this will help us raise funds to buy food and face other challenges and possibly save a life. God bless you."

St Barnabas Orthodox Orphanage and School
Orthodox Mission Kenya St Barnabas Orthodox Orphanage and School We give children a healthy start and a reflective journey of life with a sense of nurturing them into successful individuals. We offer them an exponential opportunity to get educated and protect them from unhealthy indulgences and corr...
orthodoxmissionkenya.org
Αναρτήθηκε από trygetes στις 11:55 π.μ. Δεν υπάρχουν σχόλια:

"THE TWENTY-FIRST SUNDAY AFTER PENTECOST
His Grace celebrated at Sts George and Catherine Gishari Community Rwanda. In this Community we have over 300 catecumen and already 100 have been baptized. Their Dream is to have a priest who will be near them every moment as they are growing in the Orthodox Faith. At the moment Sub-Deacon Theodoros Musonera Does Typika for them and once in a Month the Bishop and the Three Priest who have their own community service them once in a while until they shall get their own Priest.
Although it is difficult to be a Christian, it can never be said that it is complicated. If we look at all the philosophies and religions of the world, Christianity is by far the simplest. Even all four records of the words of Christ its Founder can be written down in less than one hundred pages. And the contents of those pages are very simple. Often, for instance, Christ speaks in parables, in very simple words, using images of a shepherd, a king, a fisherman, a poor man, a rich man or a vineyard-owner. Each of these parables expresses in a few lines ideas which it would take whole books to explain in the words of the learned.
Thus today's Gospel is the parable of the sower who went out to sow seed, the Word of God. In it we notice how of the four groups of people who were granted the Word of Life by Christ the sower, only one group actually received it.
The first seed fell by the wayside, it was downtrodden and eaten by 'the fowl of the air'. By 'the fowl of the air' we do not understand the birds, but the demons who inhabit the airs. They are able to 'devour' the Word of God from people's hearts, because their hearts are hard and they tread down the seed of God. The demons can do nothing if we do not first allow them to do what they want.
The second seed fell on rock and failed to germinate and develop roots because there was no moisture. Such seed fails to develop among people whose interest in the things of God is merely superficial, for whom the Faith is just a hobby, a fad. They flare up with emotional excitement but are unable to feed and nourish the Holy Spirit. Their enthusiasm does not turn into faith, because at the first temptation, at the first difficulty, they fall away.
The third seed falls among thorns, Thorns are the weeds of the passions, the cares of this world, with all its riches and pleasures. Those whose souls are choked with such cares can never bring their faith to perfection, it remains undeveloped. Their faith is never a priority and they mix it in with their cares and pleasures.
What are we to do, how are we to avoid falling into one of these three categories of people who never cultivate the seed of God?
The answer is given in today's Gospel in twelve simple words:
First of all, so that the seed of God does not fall by the wayside and may not be downtrodden or devoured by the demons, we must have an 'honest and good heart'. We must not be hard. We must not make dishonest excuses for our failings, we must not do evil, we must be honest and good in our hearts. This is called Christianity.
Secondly, so that we do not fall into careless excitement, we must cultivate the seed of God, giving moisture to it, so that it puts out roots and develops, in other words, we must 'keep the word', by obeying the commandments. This is called Orthodox Christianity.
Finally, so that the seed of God is not choked with the thorns and weeds of our passions, we must 'bring forth fruit with patience'. We cannot expect sudden and astonishing progress, with our many worldly cares. We have to be patient and persevere, making what at first may only be a mere interest into our priority and living it as a way of life. This is called salvation.
Thus today Christ gives us not learned volumes of complicated instructions to live by, but three simple rules for salvation:
Have an 'honest and good heart'.
Keep the word.
Bring forth fruit with patience.
There is no more to say."

"These African faces are the new faces of the Church..."

This is what modern mission work should look like: indigenous, authentic, and driven by genuine need. Look carefully. These African faces are the new faces of the Church. These are the new apostles of the faith. This is where the new duties of the Christian Church are calling us.
Fr. Constantinos Eliud Muthiru is a man I genuinely respect, admire, and feel honored to call my friend. I hope someday to meet him in person, face to face - but our long conversations and shared contacts and experiences have placed in my heart a deep conviction of the fundamental goodness of what he is doing there in the southern Aberdare mountains of Kenya - with the full support and recommendation of his canonical Orthodox hierarch.

Please - if you have anything at all that you can give to support his ministry and care for the orphans and poor of his community - give generously. You have my word of honor that it shall not be wasted, nor go amiss.
www.stireneorthodoxmission.org
By Fr Cassian Sibley From Life - Springs America

Greeks in Egypt
The Greek community was once one of the biggest foreign communities living in Egypt. Tens of thousands migrated to Egypt in the late 19th and early 20th century.…
vimeo.com
Αναρτήθηκε από trygetes στις 12:56 π.μ. Δεν υπάρχουν σχόλια:

"Putting some final touches to our Waterloo Church, Sierra Leone"

"Putting some final touches to our Waterloo Church - The Holy Resurrection of Christ & St. Moses the Ethiopian." 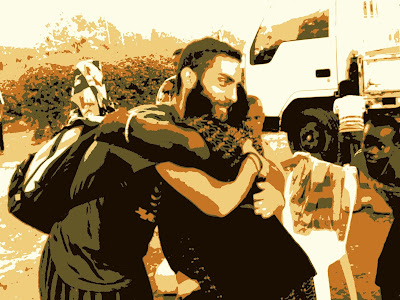