"... Orthodoxy has been part of the life of Uganda, spread not by missionaries but rather by Ugandans themselves who sought out and found the apostolic Christian Faith they were seeking." 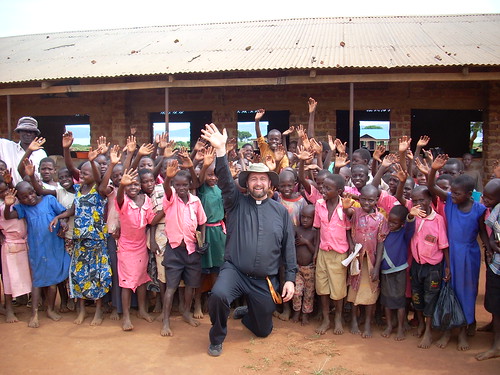 Fr. John Chagnon during his recent visit to Uganda as part of an OCMC short-term mission team that served to teach stewardship, communication, and youth ministry in Kampala and Jinja.

Uganda is an Oregon-sized country in East Africa, 20 hours away by air and nine time zones ahead of us, and yet, by Faith we are family. Since just after World War II, canonical Orthodoxy has been part of the life of Uganda, spread not by missionaries but rather by Ugandans themselves who sought out and found the apostolic Christian Faith they were seeking, a Faith they chose rather than accept the faiths of the colonial powers that ruled them until the early 1960's.
The Ugandan Orthodox Church is led by His Eminence Metropolitan Jonah, himself the son of the leader of those who discovered Orthodoxy and brought it to Uganda. It is a young church, vital, and working in a culture where old and new are intertwined and some traditional brick houses have solar panels to make sure the cell phones are charged every night. Its capital, Kampala, is a city of more than one million with bright lights and the buildings of international banks, yet the countryside is not far away as dirt roads lead to small villages and, often, an Orthodox church nearby.
In response to a crisis brought on by the sudden removal of aid from abroad due to the world recession, Fr. George Dahdouh and I were sent by the Orthodox Christian Mission Center to offer training on the topics of stewardship, communication, and youth ministry and be a resource for the clergy and people gathered in both Kampala and Jinja, a town on Lake Victoria and the source of the Nile River. Our goal was to plant the seeds of financial self sufficiency, assist the local clergy, catechists, and Sunday School teachers as we could, and listen to the needs of the faithful to discern how we could, in the future, assist the Orthodox Church in Uganda.
Along the way we saw the country, visited parishes, spoke with the clergy, and observed the culture in which the Orthodox Church lives. The Ugandan Orthodox Church is notable for its ministry to the whole person, and almost all of the parishes have a school, clinic, or both attached. What they lack in financial resources is made up for in ingenuity, as many of the village parishes also have small farms attached, the proceeds from which both provide food for the village and income for the church. The priests and deacons of the Ugandan Orthodox Church are servants in the truest sense of the word, often bi-vocational and willing to live and serve in remote areas with limited resources.
While they may be short of resources, they are not short of spirit and willingness to turn small things into great good. The clergy of Uganda are committed to spreading the Gospel, serving their people, and moving whole villages from poverty to stability. Its no wonder they've earned the respect of people in the street and wearing their cassocks in public is considered an indication of honor. In one case, a police officer addressed the monk who served as our driver as "Holy Father", and in so many cases the title fits. While we spoke about stewardship and the topics of ministry, they reminded us of faithfulness to God.
In a recent e-mail, one of the monks addressed me as "Fr. John the African", and it is an honor to be considered as such. My hope was to learn, to share, to grow, and to help in whatever capacity I could, but in truth I left with much more than I gave and have been profoundly changed by my experience with the faithful of Uganda. Yes, there are fears and stereotypes about Africa, but the vast majority of them are unfounded. What you will more usually find is a whole continent of good people who live in a different context but still have qualities that we here in the United States would be wise to emulate. In the specific case of the Ugandan Orthodox Church, we discovered, again, that our Faith is something that binds us together beyond our nationalities, our languages, and our cultures. We truly have brothers and sisters - family - all over the world.
On a personal note, I would encourage people to go to www.ocmc.org and look for the short-term mission opportunities around the world. You may have just the skills needed to bring good things to your Orthodox brothers and sisters around the world. To travel and to work for the faithful across the world will be a life-changing experience. It's not a vacation, but you will come back better than you left. Indeed, if you would like to go to Uganda, there will be a healthcare ministry team in the summer, and there are open slots and plenty of time to prepare.
Finally, a word of thanks, again, to all of those at St. George who were generous in your support. Your names are on the prayer list of the St. Paraskeva Monastery on the shores of Lake Victoria, and if there is any good that comes from our work in Uganda, you also share in the credit and blessing. Your prayers and support of the Orthodox Christian Mission Center and the missionaries who serve in your name all over the world are always appreciated.