Yesterday we went to the Voortrekker Monument for a ceremony in which two Orthodox priests, Fr Zacharias van Wyk and Fr Kobus van der Riet, were given special awards for their contribution to Afrikaans literature and culture by translating Orthodox liturgical texts into Afrikaans.

The awards were made at an event arranged by the Federation of Afrikaans Cultural Organisations (FAK) to commemorate the 80th anniversary of the publication of the Bible in Afrikaans. People unfamiliar with South African history over the last century or so might not realise how enormously significant this award is, and how surprising that it should be given to two Orthodox priests.
To explain this fully, one would have to go deeply into Orthodox Church history, and the history of Afrikaner nationalism, both of which are very complicated, so to any historians reading this who might accuse me of over-simplifying things, I have to say yes, I have over-simplified, and I’m aware of that. 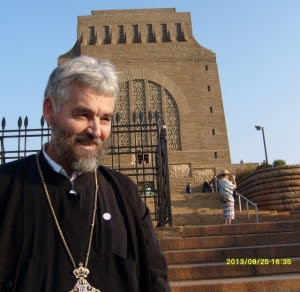 
In the ninth century two Orthodox missionaries, Cyril and Methodius, set out to evangelise the Slavic peoples living eastern and central Europe. They learned Slavic languages, devised an alphabet for them, and translated the holy scriptures and liturgical texts into those languages. This met with considerable opposition from the Church of Rome, which maintained that the only suitable languages for Christian worship were those used by Pilate in the inscription fixed to the cross of Jesus: Hebrew, Greek and Latin. In the Western Church all worship was in Latin, but in the East, numerous languages were used, especially in Africa, where translations into local languages had been used since the 2nd century.
It was therefore natural for Afrikaans-speaking Orthodox priests to want to translate liturgical texts into their own language for the growing number of Afrikaans-speaking Orthodox Christians. Fr Kobus, who was at one time a classics lecturer at the University of South Africa, has translated the text from Greek, and together they have tried to make the result good Afrikaans.
Afrikaans is a relatively new language, which diverged from the Dutch spoken by the officials of the Dutch East India Company who colonised the Western Cape in the 17th century. By the 19th century the Dutch Bible had become difficult for most Afrikaans-speaking people to read, and the publication of the Bible in Afrikaans in 1933 made it much more accessible to Afrikaans-spealing people. It also helped to stabilise Afrikaans spelling and usage, and boosted its transition from being a purely spoken language (in the 19th century it was disparagingly referred to as “kitchen Dutch”) to a literary language, in which some beautiful poetry has been written. 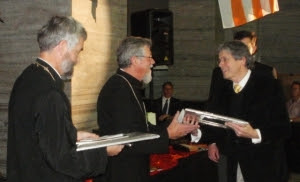 
Afrikaans is the third most widely-spoken language in South Africa, after Zulu and Xhosa, and is spoken as a first language by 13,5% of the population. It is the dominant language in the western third of the country. Afrikaans is also spoken as a first language by a little over 10% of the population of Namibia.
The translation of the Holy Scriptures and liturgical texts into Slavic languages helped to establish those languages as literary languages too, so much so that Church Slavonic is still widely used as a liturgical language in Orthodox Churches.
The difference, however, is that in most of the Slavic countries, at least those that used the Cyrrilic script based on the original Glagolitic alphabet developed by Saints Cyril and Methodius, Orthodoxy became the dominant, if not the only form of the Christian faith. The proportion of Afikaans-speaking Orthodox Christians is minuscule by comparison. And that is what makes this award so astounding.
Fr Kobus, who was received into the Orthodox Church at the Church of St Nicholas of Japan in Brixton, studied Orthodox theology at St Tikhon’s Seminary in Pennsylvania, USA, and also spent a year in a monastery in Greece, has worked on establishing a new Afrikaans-speaking parish in Eldorado Park in the south of Johannesburg, and also serves in some other mission parishes.
Fr Zacharias lives at Robertson in the Western Cape, where he has established an Orthodox centre, and also has a blog which gives Orthodox teaching on each Sunday’s scripture readings in Afrikaans. 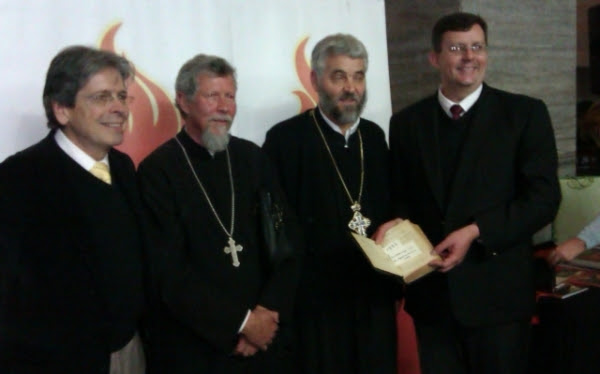 
The awards were presented by Dr Danie Goosen, the chairman of the board of rhte FAK, and the occasion was arranged by Dr Danie Langner, the executive head of the FAK. His predecessor, Dr Johann Roussouw, introduced the awardees, and it was probably due to him that the FAK were made aware of their work in the first place. In his introduction Dr Roussouw, who teaches philosophy at the University of the Free State, pointed out some of the attractions of Orthodoxy to Afrikaans-speaking Christians.