OCMC is looking for volunteers to sign up for 2017 Mission Teams.
An OCMC team will be traveling to Kenya April 21-May 2 to participate in a women’s ministry. They will teach at the Diocese Mother’s Union retreat which reaches out to women from different tribes and regions. Also, June 27-July 10, an OCMC team will travel to Bali, Indonesia, to lead a family and youth outreach as well as teach English. Applications and additional opportunities are available online at www.ocmc.org, or by calling OCMC at 1-877-463-6787 (ext. 142).

PRESENTATION OF A VOLUME DEDICATED TO THE RESTORATION OF THE “ROTONDA OF THE EAST”, OF THE HOLY CHURCH OF ST GEORGE, OLD CAIRO

On Thursday 24th November 2016, in the presence of His Beatitude Theodoros II, Pope and Patriarch of Alexandria and All Africa, a very successful presentation took place of the Volume “St George in Old Cairo” at the Sarogleion Mansion in Athens, which was attended by representatives of the ecclesiastical, business, cultural and social life of the country.
Attending the presentation were the representative of His Beatitude Ieronymos Archbishop of Athens and All Greece, His Grace Iakovos Bishop of Thavmakou, the Deputy Minister of Foreign Affairs Mr. Giannis Amanatides, the Special Secretary of the Ministry of Foreign Affairs Mr. Efstahios Liantis, many Priests from the Patriarchate of Alexandria, Hierarchs of the Church of Greece, Mr. And Mrs. Athanasios and Marina Martinou who Great Benefactors of the Patriarchate of Alexandria, Office Bearers of the Patriarchate of Alexandria, clergy and laity.
An address was made by the Representative of the Alexandrian Patriarch in Athens, His Eminence George Metropolitan of Guinea, and then the book was presented by Mrs. Lina Mendoni, former Secretary General of the Ministry of Culture, who spoke extensively on the history of the Church of St George and the contribution of the Patriarchate of Alexandria in the spreading of the Gospel message in Africa.
Also, a talk was given on the restoration works od the Holy Church by the Civil Engineer of the Aristotelian University of Thessaloniki Dr. Gregory Penelis, Honorary Head of the Directorate of Conservation of Ancient and Modern Monuments Dr. Nikos Minos and the art historian and editor of the book Mr. George Milonas.
In his address His Beatitude Theodoros II, Pope and Patriarch of Alexandria, visibly moved, spoke of the two great benefactors of the restoration of the Holy Church, Athanasios and Marina Martinou, and also wholeheartedly thanked all those who worked so hard on the Church of St George Old Cairo, from the engineers to the simple workers.
Finally after the presentation, a music programme followed by Mrs. Evanthia Reboutsika.
Περισσότερα... http://www.patriarchateofalexandria.com/index.php?module=news&action=details&id=1216#prettyPhoto
Αναρτήθηκε από trygetes στις 3:45 π.μ. Δεν υπάρχουν σχόλια: 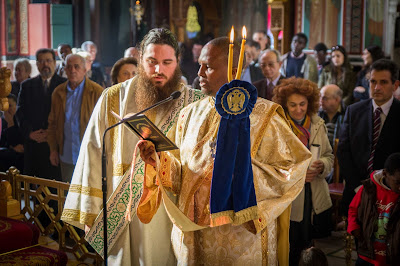 The Orthodox Mission has been able to start this project! Orphans will be able to live in these homes...

This has been a long time dream come true! The Orthodox Mission with the help of our overseas sponsors in the USA (esp. Mr. Nico Mougeris) and Australia (esp. P4K) has been able to start this project! Orphans will be able to live in these homes as though it were their own house. It's really amazing! We still have a long way to go!

Bishop Athansios of Kisumu with the parishioners of st.Paul Sidioni in Vihiga

H.G.Bishop Athansios of Kisumu with the parishioners of st.Paul Sidioni in Vihiga after Divine Liturgy 27/11/2016 .It was wonderful.

His grace Bishop Innocentios Byakatonda celebrated Divine Liturgy in Bujumbura –Burundi at the headquarters of the orthodox church in Burundi and Rwanda. His grace had just returned from Alexandria and he conveyed the greeting of our spiritual father his Beatitude Pope and Patriarch Theodoros II.

Today was a very special day, as we welcomed through baptism three families and the young son of one of our longest serving mission workers into the Orthodox church. Mary Adams and myself had the honour to also be sponsors as did another local member of our church mission. A blessed day indeed.... (Eleni Athinodorou on the ground in Sierra Leone).

Today dated 26 November 2016, under the blessing of our bishop, Bishop Innocentios Byakatonda, we had concélébrée in kanyosha on the plot of the father agapius hakizimana because Christians of kanyosha have asked to the bishop that the priest can Go twice a month to celebrate the divine liturgy because the cathedral is located away from them to go to the prayer.
This is why we ask the help of prayer so that we can find a ground for the construction of the parish and facilitate the task to Christians of kanyosha.

Sierra Leone: The preparation for the construction of the Mission's Ebola Orphanage had begun...

The preparation for the construction of the Mission's Ebola Orphanage had begun in earnest in our Waterloo Compound (Sierra Leone).
Thanks to all who have made it possible. Above all we thank our Lord Jesus Christ.
+ Posted by Rev. Themi. 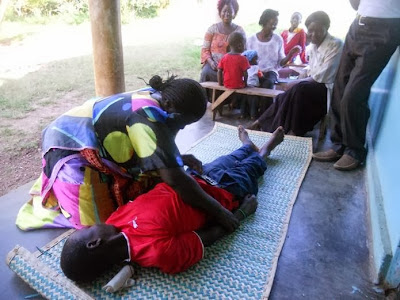 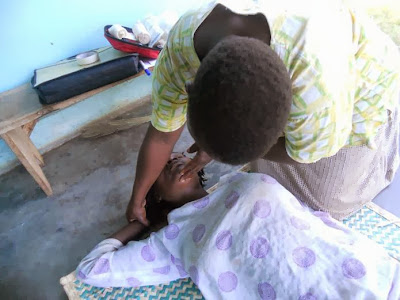 Kenya: Archbishop Makarios checking the construction of a parish...

An amazing pastoral visit to Nakuru.. Archbishop Makarios checking the construction of a parish in the area. 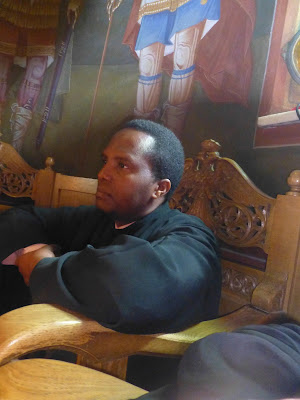 Today was a blessed day to St Irene Orthodox mission fraternity!!
His Eminence Archbishop Makarios visited us in the mission centre and later to my house...it was also a pleasure for him to meet our new born baby Modesto!!!!
www.stirene.epizy.com

" Inspecting our Mission's beautiful new beach front land at Lungi (Sierra Leone) where we will extend our spiritual and philanthropic services for the glory of Christ."
Posted by + Rev. Themi

OCMC News - Please Support Orthodox Missions this Thanksgiving
Please prayerfully consider making a gift to further Orthodox Christian Missions. Help the Church reach those still in darkness this Thanksgiving.Dear Brothers and Sisters in Christ,Ermir, a Muslim, walked into an Orthodox church.I'll tell you what happened next in a minute. But first I have a reque...
ocmc.org
Αναρτήθηκε από trygetes στις 11:53 π.μ. Δεν υπάρχουν σχόλια:

The Orthodox Church of Sierra Leone's vision for Orphans

After years of talking about it, Fr Themi has the plans and 75% of the funding for the combination school and orphanage at the Tower Hill compound.
To help please visit www.pk4a.com
Posted by P4K USA & AU

Liturgical of Sunday, 20/11/2016 in the parish of Abidjan, Orthodox church