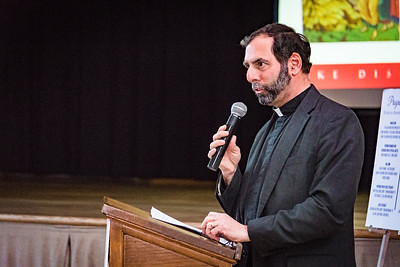 Throughout Lent, events were held across the country in support of Orthodox Missions. Here, OCMC Board Member Fr. George Liacopulos addresses guests at a banquet to support missions at St. Katherine Greek Orthodox Church in the Washington D.C. area.

Towards the end of April, three separate events took place that raised funds for Orthodox Missions. The AZ Mission Walk, Mission Team Chicago Dinner, and the DC Banquet were all held to raise awareness of the need for spreading the word of Christ throughout the world.
Mission Team Chicago Benefit Dinner was held on March 15, 2018, the twenty-first year for this dinner. Hosted at St. John the Baptist Greek Orthodox Church in Des Plaines, IL, there were approximately 275 in attendance from many area churches. The gross income was very close to $30,000, a huge success for Orthodox Missions. His Grace Bishop Athanasius (Akunda) of Kisumu and Western Kenya was the honored guest and main speaker.
His Grace related the tremendous growth of the Orthodox Church in Kenya and the efforts to teach about stewardship toward becoming self-reliant. He urged those in attendance to see challenges as opportunities for growth, especially in mission work.
Meanwhile, on April 29th the sixth annual Arizona Walk for Missions raised awareness in Tempe, AZ. Both OCMC and Project Mexico & St. Innocent Orphanage were the honored Orthodox Christian ministries for the event.
The Walk was organized by past mission team participants, and it encouraged a sense of community between local parishes while focusing on the bigger picture - spreading the gospel to all nations and helping our brothers and sisters in Christ.
According to Antonia Adams-Clement, who has done mission work in Kenya and Alaska, “For over six years, our small Walk has brought in over $21,300 for OCMC and Project Mexico.” A wonderful success for Orthodox Missions and raising awareness!
On April 22, a banquet for missions was held outside Washington, DC, at St. Katherine Greek Orthodox Church in Falls Church, VA. The banquet was sponsored by the Metropolitan Washington DC Mission & Outreach Committee. It was their largest and most successful OCMC benefit dinner to date. Over $25,000 was collected, and contributions are still being received!
The featured speakers at the banquet were Fr. George Liacopulos, past President of the OCMC Board, and Antonia Chelpon, past OCMC Mission Team member and parishioner from St. Katherine's. Ms. Chelpon gave an inspiring speech about the mission trips to Russia, Alaska, and Brazil made by her father, Fr. Ted Chelpon of blessed memory. She shared about the OCMC and reflected on her own trips to the orphanage in Guatemala with a mission team from St. Katherine.
Also in attendance were missionary candidates to Guatemala, Thomas and Elizabeth Manuel, who are scheduled to begin their two-year service in Guatemala in October 2018.
Events to raise funds for Orthodox missions at the banquet included theme baskets (each valued at over $200) that were raffled off to the 157 people present. The community underwrote the entire cost of the evening so that every dollar collected could be sent to the OCMC to grow the work of Orthodox missions.
In addition to the impressive raffle prizes offered, attendees enjoyed a classical guitar performance from Christopher Wyton, and the banquet committee provided a slide show featuring photos of mission trips throughout the years, taken by not only members of St. Katherine but the surrounding Orthodox parishes as well.
Linda Jouvanis of the banquet dinner committee had this to say about the banquet. “It was an uplifting event that truly represented the joy that one gets from sharing their Orthodox faith with the world. And the fact that indeed we are all missionaries called by God for His Great Commission.”
A special recognition should be made to the banquet dinner committee, chaired by Eugenia Vroustouris and Linda Jouvanis, who coordinated the entire event. Also to Fr. George Liacopulos, Antonia Chelpon, Dr. John Demakis, Betty Slanta, Laura Paulus, and Antonia Adams-Clement for all their efforts to raise awareness about the OCMC through these events, and everyone who supported Orthodox Missions at each of them.
The Orthodox Christian Mission Center thanks you for your efforts!