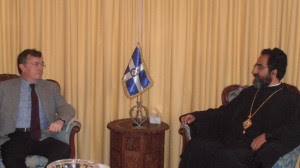 The Greek deputy Minister of Foreign Affairs Mr Kyriakos Gerontopoulos, visited the Archbishopric of Good Hope this morning 16 November where he met with His Eminence Archbishop Sergios.
Mr Gerontopoulos is responsible for Hellenes abroad and matters  concerning Greek Orthodox Christians was discussed.  Mr Gerontopoulos showed particular interest in the work being carried out by the Archbishopric in relation to the preservation of the Orthodox Church and Traditions, of all cultures, and the outreach programmes initiated by His Eminence.
After the meeting Mr Gerontopoulos paid a visit to the Metropolitan Church of Saint Nicholas and Irene.  He is scheduled to meet with members of the Hellenic Community of Cape Town this afternoon and he will attend the Service of the Holy Eucharist at the Cathedral of Saint George in Woodstock, tomorrow morning.