Seeing the Love of Christ in the People of Uganda 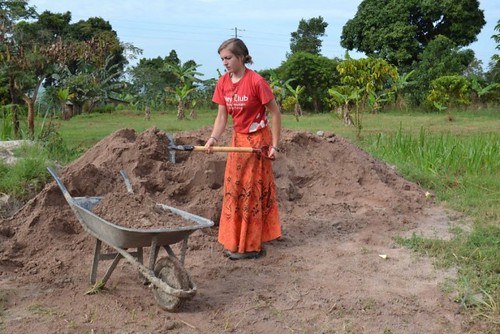 Earlier this year an OCMC Team to Uganda helped to build a school in the
village of Bulera.


In the beginning of the summer of 2017, I experienced the Orthodox faith in a special and unique way. Having the opportunity to assist in the building of a school building associated with a church community was truly a blessing and I will never forget this experience. Uganda is truly a beautiful country. Waking up every morning and hearing the sounds of nature reminded me that we all live in God’s creation.

This feeling of living in God’s creation continued throughout the day when we were working at the build site. Often times, one of the nearby families would give us fresh grown maize as a snack, and on occasion would show us the farming land where they had avocados, passionfruit, and mangos growing. Through these experiences I was reminded of Genesis 1:11, where it states: “Then God said, ‘Let the land produce vegetation: seed -bearing plants and trees on the land that bear fruit with seed in it, according to their various kinds.’ And it was so.” The caring nature of the Ugandan people became evident through small acts of kindness. Throughout the trip, it became apparent that the Ugandan people wanted to show us the best that Uganda had to offer; this showed their love for their country.

There were seven of us who traveled to Bulera by way of Kampala after a combined twenty–four hours of flying from Jacksonville, FL to our final destination of Entebbe. During the first day or so of the trip, the team members all got know one another better as we learned more about of the Orthodox Church of Uganda. By this point, we were all excited to start our journey through this wonderful mission.

During the week, we made good progress on the construction of the school by installing the windows, completing the roof and floor with help from the local masons. We also had an opportunity to meet some of the residents of Bulera and often times would play kick ball with the children. On the last day, we were able to see all of the progress we had made and were in awe of our work. This was also a special day because we were able to make palm crosses for the children and they were excited to show their families these little treasures.
Throughout our trip we were blessed to have met such amazing clergy of the Orthodox Church of Uganda. Our host, Fr. Nicholas Bayego, a graduate of Hellenic College and Holy Cross Greek Orthodox School of Theology, discussed with us what a special opportunity this short-term mission was considering the last team to go to Uganda was two or three years ago. Over the course of the week, Fr. Nicholas would also make funny anecdotes to make us laugh during the work days in the tropical climate. We were joined by another local priest, Fr. Emmanuel, who was very excited to have us there and to make progress on the school. He also told us that there is an ongoing shortage of clergy in Uganda. He is the priest for four parishes and travels to all the communities. This was an astonishing fact to learn because we all take for granted that our spiritual fathers are always there.
It was an honor to have the opportunity to meet His Eminence Metropolitan Jonah of Kampala and All Uganda as well. After talking with His Eminence, it became apparent that the Orthodox Church of Uganda is thriving and His Eminence looks forward to continued growth in the future.

Based on my participation on this mission trip, I was able to see the Orthodox Faith in Africa, a part of the world I had never been to before. I’m so encouraged to see the level of commitment that the Ugandans have to their Orthodox Faith. I look forward to returning to Uganda and to future OCMC mission trips elsewhere in the world.