On the 15th of September in the year 1998 the Greek Orthodox Church of Alexandria sent out an apology...

When the Church apologized... 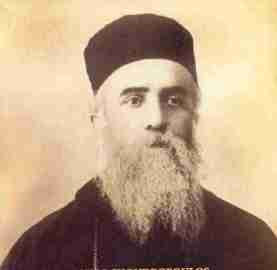 On the 15th of September in the year 1998 the Greek Orthodox Church of Alexandria sent out an apology. Here is what they wrote,
“The Holy Spirit has enlightened the gathered members of the Holy Synod of the Patriarchate of Alexandria and all Africa, under the leadership of H.B. Petros VII, Pope and Patriarch of Alexandria and all Africa, more than a century since Saint Nektarios, the great Teacher and Father of the Holy Eastern Orthodox Church was expelled from the Church of Alexandria, to reach the following decision:
Taking into account the resolution of the Church to rank Saint Nektarios amongst the saints because of his innumerable miracles and his acceptance within the religious conscience of Orthodox Christians throughout the world, we appeal to the mercy of the ever-charitable God. We hereby restore the ecclesiastical order of the Saint of our Century, Saint Nektarios, and grant to him all due credits and honors. We beseech Saint Nektarios to forgive both us, unworthy as we are, and our predecessors, our brothers of the Throne of Alexandria, for opposition to the Saint and for all which, due to human weakness or error, our Holy Father, Bishop of Pentapolis, Saint Nektarios, suffered.”
-PETROS VII Patriarch of Alexandria and All Africa.
What led to this apology? Let’s find out…
Saint Nektarios, known for his countless miracles of healing, and as, “A Saint for our Time,” was born in 1846 in Thrace. When he was fourteen, he left his home and traveled to Constantinople in search of work and study. There, St. Nektarios lived a very modest life constantly praying to Christ and believing that He would provide everything he needed to live. Many acts of kindness were shown to St. Nektarios by his neighbors and townspeople, and it was through them, and by the grace of God, that St. Nektarios became an accomplished academic at the age of twenty-one. By this time, too, St. Nektarios was considered a theological scholar and a devout Christian. Upon completing his studies, he left Constantinople and entered a monastery in Chios.
Some time later, the Patriarch Sophronios of Alexandria, Egypt, offered St. Nektarios a scholarship to study theology at the University of Athens. Upon completing studies at the university, St. Nektarios was ordained to the priesthood to serve in Cairo, Egypt, where he became quite popular as a preacher and confessor. Within five months of his ordination, the Metropolitan of Nubia blessed St. Nektarios with the title of archimandrite, and two months later he was appointed to the high position of Patriarchal Trustee.
It was in January of 1889 that the Metropolitan Nilos suddenly passed away. As the seat was under the Patriarchate of Alexandria, Patriarch Sophronios nominated St. Nektarios to fill the vacancy. Therefore, on January 15, 1889, St. Nektarios was ordained a bishop and began to serve his congregation with humility and an oath to never succumb to the temptations of this world. He served as bishop until countless rumors and false accusations were brought up against him. Patriarch Sophronios became subjected to unbearable pressure regarding the rumors circulating about Metropolitan Nektarios (including the rumor that Nektarios wanted to become patriarch instead of Sophronios). Soon after, Sophronios stripped Metropolitan Nektarios of his authority and duty as bishop. Upon this humbling and confusing experience, St. Nektarios returned to Athens where he continued to serve God by preaching and teaching in its many churches.
In the beginning this was difficult because so many lies and rumors had hurt his reputation in the eyes of the people. But over time, love won. His popularity among the people in Athens again gained him popularity, and led to his appointment as dean of Rizarios Ecclesiastical School in Athens, where he dedicated fourteen years of his wisdom and loving care, until his body forced him to retire on March 24, 1908. Once a new dean was found and instated as his replacement, St. Nektarios retreated to the island of Aegina, to the monastery that he helped to establish years before.
With his return to Aegina, the monastery began to receive countless visitors who sought to be in the presence of St. Nektarios’ pious and loving nature. While there, St. Nektarios witnessed the completion of the building of the chapel on the grounds, which he first started in July of 1906. On June 2, 1908, the chapel was dedicated to the Holy Trinity, and he began to settle in and plan for the building of his simple home on the grounds. Throughout the years that he spent in Aegina, St. Nektarios wrote and published many theological treatises, guided the nuns of the monastery toward divine work, and performed many miracles of healing. It was also while serving at the monastery, that St. Nektarios endured many spiritual and physical tribulations, as well as witnessed the magnificent power of the Trinity and the Virgin Mary.
On November 9, 1920, St. Nektarios retired his spirit to the Lord. However, even in death St. Nektarios continues to perform miracles, the first of which occurred in the very hospital room in which he died. With the passing of St. Nektarios, a hospital nurse, assisted by a nun from the monastery, immediately began to change his clothes and threw his undershirt on the next bed. In this bed lay a paralytic, who once the undershirt landed upon him, was instantly healed and jumped out of bed, praising God for his miraculous healing. This was the first of many miracles that St. Nektarios began to perform in death. The stories of these miracles, along with his body remaining completely intact and emanating a magnificent fragrance for twenty years after his death, led the nuns at the monastery to venerate him as a Saint of the Church. Finally, in April of 1961, the Ecumenical Patriarch of Constantinople further blessed St. Nektarios with a proclamation of Sainthood.
What a worthy example of humility, patience, long-suffering, faith, hope and love. Holy Father Nektarios, pray for us!