On Tuesday 22 April, His Eminence Archbishop Sergios, together with parish priest Reverend Fr. Nikolaos Giamourides and Deacon Fr. Michael officiated at the Vespers service held on the eve of the Feast of Saint George. This year the Very Reverend Archimandrite Evlogios Santonellos from George joined them for the celebration. A cocktail was held in the Church Hall after the service.
On Wednesday morning they officiated at the Service of the Holy Eucharist. The services were held in the presence of Mr. Thomas Matsoukas and Mr. Nassos Martalas, president of the Hellenic Community of Cape Town and environs, and members of the administrative committee. 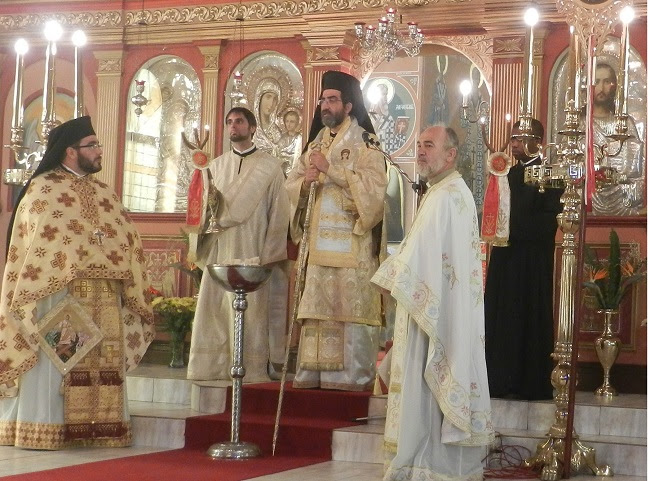 In His address for the Feast His Eminence paid tribute to the Patron Saint of the Cathedral and made special mention of the fact that Saint George is not only the  Patron Saint of the Church but also of the Orthodox Faithful of Cape Town and the environs.
He said that many miracles known and unknown are attributed to Saint George.  The Saints that were martyred in the name of  Christ, have also been crowned by Him. Their  lives present us with  an example to follow. His Eminence made reference to the ancient Orthodox Church of Saint George in Cairo which is very well known and visited by Orthodox Faithful and  scholars of Archeology. The church is also visited by thousands upon thousands of Muslims who come to seek a blessing and help from the saint.