The so called “paradises” and Paradise... on the island of Mauritius 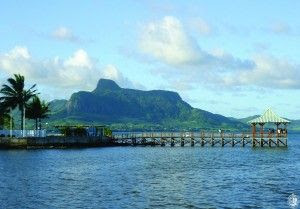 About 1,000 kilometers east of Madagascar within the more often than not wild ocean, so close to the much-afflicted land of Madagascar, but at the same time so far away from its world, lies another “paradise”, like a water lily in the waters of the ocean.
A shield-shaped circumferential layout of an underwater coral substrate knows perfectly well how to protect its beautiful coastline, thus creating a circular white veil round this “inaccessible” ocean bride.
A bride who plenty of people want to get close to, and they have achieved it to a certain extent, but who still remains an unsolved mystery for us, a new, unknown world, different, sometimes beautiful but quite often discouragingly difficult, sometimes full of joy and sometimes full of sorrow and difficulties that seem to be insuperable indeed..
Welcome to “paradise”.
This is the first sign one notices at the staircase of the airport on the island of Mauritius; a fabricated title, of course, coming from the commercial world of tourism planning that calculates everything, but at the same time a phrase that sounds like a riddle to one’s ears.
1.3 million souls are hosted within the heart of this little “paradise’ .The third most densely populated place worldwide, at least until a few years ago. 60% of the population is devoted to the religion of Hinduism.
Hinduism prevails in this tiny country as the dominant and official religion; it is the element that literally “dresses” the neighborhoods of Mauritius and paints in bright colors the people who live there permanently. From the very beginning, the cold sight of the Hindu deities in every neighborhood, the magnificent small or big carved marble temples with the coldness that characterizes them and their white inexpressive moribund image, the monstrous figures of their deities and many times their inhuman face, unintentionally predispose one negatively.
On the other hand, 20% of the population belongs to a world familiar to us, of course not always so congenial: Islam, the second dominant religion. Through its loud self-projection, hooked on money, and for the time being, hiding its cruel aspect, it tries to impose its presence and reminds us that we have this very well-known neighbor right in front of us to make our struggle even more difficult.
As for the rest of the population, about 20%, many times even 30%, belongs to Catholicism, Lutheranism and the remaining more or less known medley of protestant denominations which drown the already weak people and create the usual chaotic picture that characterizes the West, in that corner of the African land as well.
The city bus stops at garage Bala, in the capital city of Port Louis. The feet are already familiar with the way. They go past the Hindu temple where the driver drops you off, heading close to a second guru mosque-or rather shed for mind to rest in speech-preparing at the same time your soul for the hidden grandeur made especially for you by God’s Providence, your life, the wishful thinking of the few noble souls, and finally by Faith that is smoldering like a little flame, like a small-big miracle in this corner of the Divine Creation.
The Holy Church of the Transfiguration of Christ Savior at Port Louis. This is true Paradise in the fake tourist man-made “paradise” of Mauritius. A vigil lamp that I found half-extinguished. I am saying this with bitterness but also – I don’t know why-with a hidden joy.
In co-operation with the faithful of the Church who are really very few-two to three dozen at the (very) most, we took the decision to start from the very beginning.
A big step, perhaps. Perhaps not. The anxiety and the question inside the soul remain big. We are hopeful. We trust in God’s mercy. Not in weak hands. We trust neither in feeble human logic nor in calculating or planning. We trust in absolutely nothing human. We set our hopes on Him who performed this miracle that we still have right in front of our eyes, and in the hearts of the children of God, those who the earth is now hiding in its motherly guts, among whom the one who built this Church, the late first Bishop of Madagascar Nectarios, but also those who are currently striving and praying and blessing the unworthy and weak of our members. To them and t o A l m i g h t y G o d belongs e t e r n a l g r a t i t u d e a n d p r a i s e.
Therefore, let us start this struggle from the beginning, no matter how bitter it might seem. Every single sacrifice, hides its own Golgotha and its own Resurrection.
Let us welcome ourselves to Paradise then.
To this hidden, real Paradise this time, which is beclouded by the hell the human mind has called paradise”. This is Paradise for us, our last and only hope for Salvation, the Ark of the shelter of our soul. Our Church. The Church even here in Mauritius, which survives miraculously and incomprehensibly within decay and death.