Archbishop Makarios, Metropolitan of the Archdiocese of Kenya, Visits the United States 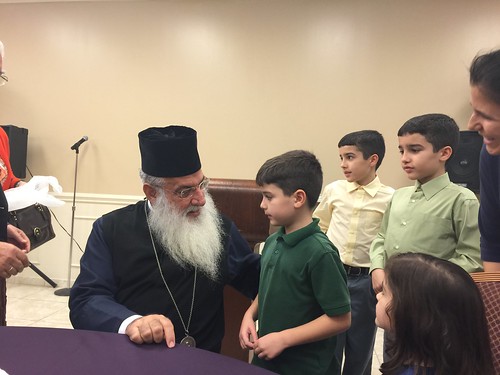 During a recent visit to the United States, His Eminence Archbishop Makarios, Metropolitan of the Archdiocese of Kenya addressed the faithful at an event in Chicago and attended Clean Monday services at Holy Trinity Greek Orthodox Church in Orlando, Fl. Here His Eminence greets children from Holy Trinity. His Eminence also took time to share recent developments and pressing needs of the Church in Kenya with OCMC staff.

Mission Team Chicago was blessed to welcome His Eminence Archbishop Makarios, Metropolitan of the Archdiocese of Kenya, for their annual event to raise awareness and support for Orthodox missions. The evening banquet saw many people from many communities gather in fellowship and to learn about the Church in Kenya. His Eminence was grateful for the warm welcome and encouraged those in attendance to support the growing Church in Kenya through the Orthodox Christian Mission Center (OCMC).
OCMC staff was able to hear firsthand from His Eminence what some of the needs are in Kenya when he visited the Mission Center in St. Augustine, Florida, following the event in Chicago. In His Eminence’s time with the staff, he spoke candidly about the difficulties that the Church in Kenya is facing in the wake of the global financial crisis. There are several important ministries active in Kenya right now, according to His Eminence, but none more vital than the seminary.
The Makarios III Seminary located in Nairobi trains Orthodox clergy from all over Africa. It is also a center for translation where OCMC Missionary Meg Engelbach is currently working with OCMC Mission Specialist Dr. Michael Colburn to translate Church texts into many languages that are spoken throughout East Africa. The young men that graduate from the seminary become the priests and catechists that spread the Faith and pastorally care for the faithful.
Also of great importance to His Eminence is the continued operation of the 30+ primary and 18 secondary schools that the Church runs. These schools not only empower Kenyan youth for the future, but also serve as a powerful witness to the Orthodox Faith. Immersed in the prayers and experiencing the love offered by the Church in these schools, many children and their families decide to become Orthodox Christian.
All of these initiatives are in dire need of support. In order to ensure that this support is used most efficiently and in order to effectively coordinate the many activities of the Archdiocese, His Eminence asked repeatedly that all support for the Church in Kenya go through the OCMC.
As Clean Week began, His Eminence prayed with the faithful at Holy Trinity Greek Orthodox Church in Orlando, Florida. OCMC Executive Director Fr. Martin Ritsi and Teams Associate Director Pres. Renee Ritsi also hosted a dinner for the Metropolitan that was attended by several Orthodox clergy from north Florida including His Grace Bishop Dimitrios Couchell before His Eminence headed back to Kenya. His Eminence's parting words were aimed at all Orthodox Christians in the United States. “Please continue to pray for me and for the Church in Kenya. This is needed above all else.", His Eminence shared.