Sierra Leone: Diamonds of love and sacrifice from the Lion Mountain Range

Going through the most joyful period of the year, that is, the Easter period, my mind and heart cannot help overflowing with joy, hope and nostalgia, since they are still on the missionary division of Sierra Leone, just one month after my return. It’s there that I experienced the moving adventure of Faith, it’s there that the Chancellor, Fr, Themistocles Adamopoulos chose to follow the Crucified Christ to the corner of Africa, where reside the poorest of the poor.
By the grace of God, with the blessings of the Pope and Patriarch Theodore the II of Alexandria and all Africa and the financial contribution of the friends of the Mission from the little they have, within the last seven years the newly established but so fervently struggling Orthodox Church of Sierra Leone carries out in a wondrous way a diverse missionary, philanthropic as well as educational work despite the adversities and the numerous problems that can occur any time.
First of all, as regards the catechetical work and that of worship, I was greatly impressed by the spirit of freedom and love with which the Church embraces those souls that seek the Truth and come to hear the Word of God, which is preached in a simple, experiential way. The christening of the catechumens is not held roughly and hastily but after a long period of catechesis and a fully conscious decision on their part. Two highly emotional moments were when the priest knelt down in order to give the Holy Communion to some handicapped people in a wheelchair, and at the Vesper of Forgiveness, with the faithful exchanging words of sincere forgiveness with each other and the priests forming a circle of unity in an atmosphere full of reverence during the period of the Great Lent.
As for the part of charity, on the outskirts of the capital city, in the region of Waterloo, Fr Themistocles established what the Patriarch called on a recent tour to Sierra Leone ‘the pride of the Patriarchate’, the village of Saint Moses the Black for the war amputees. This compound of residences consists of lodgings for the disabled and their families, clinic, school, workshop and church, and offers its services to the most vulnerable and helpless citizens of this country: the homeless amputees. The recent fifteen-year-tragedy of the civil war in conjunction with diseases like polio, have left countless victims with mutilations or disabilities. Those people, stigmatized and marginalized, found a warm embrace of God to shelter their dreams. 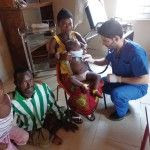 Catechism in the amputees’ village 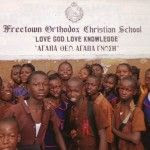 
In such an exceptional place is the clinic of Saint Mary Magdalene and Saint Olympia, where for a week, along with a local cardiologist, we examined more than 350 patients from the surrounding areas and helped them with the right medical treatment. Apart from malaria, undernourishment, tropical and skin infections, we observed increased percentages of hypertension due to the psychosomatic impact caused by the war. Next step is the construction of a special clinic for the creation of prosthetics for the amputees, a worth-supporting effort.
Fr. Themistocles lays special emphasis on the part of education, mainly of those children that have exceptional educational capabilities. The capital city of Sierra Leone has been named “the Athens of Africa” due to its tradition in the field of education. The school of the Orthodox Church in Syke street offers free education to more than 1,500 children with primary and secondary schools. Unforgettable will be the memory of the school wall, where in clear Greek letters stands out the phrase “Love God, love Knowledge”. Within the school premises we gave the students a dental examination and lectures on oral hygiene, preventive hygiene and medical emergencies. The same place hosts the activities and events of the Orthodox Youth Fellowship, where we had a catechetical class and a video projection with pictures from the Orthodox tradition. Also, there is a college for students operating with distinguished professors from all over the world.
Before leaving for Sierra Leone, I filled my overweight luggage with little holy icons and crosses, books, school stuff, balloons and the communion bread that my mother kneaded for the Divine Liturgy. On my return, the same suitcases were carrying some solid diamonds from the bloodstained land of Sierra Leone. Those were the sincere and guileless communion of love with the brother there, the pure smiles on the children’s faces, the chances for ritual services in the Orthodox Churches, and Fr. Themistocles’s phrase “It’s God we should glorify, not grumble”. Unconsciously came to my mind one of Saint Symeon the New Theologian’s sayings, which fits this humble Orthodox missionary division: “There is a little joy that laughs at death”. Christ is Risen!