Welcome to the website of the Orthodox Archbishopric of Good Hope!

Welcome to the website of the Orthodox Archbishopric of Good Hope!
Note: We have unfortunately had some major technical problems with this website recently and are busy reconstructing it. We apologise for any inconvenience and hope to have it up and running in a few days…
We are the local presence of the “One, Holy, Catholic and Apostolic Church” on the southern tip of Africa. The Orthodox Church has passed on the Christian faith since the time of the Apostles and it was established in Africa when Saint Mark preached the Good News of Jesus Christ in Alexandria in the middle of the first century A.D. Saint Mark the Apostle, founder of the Church of Alexandria.

From its earliest days, the Church in Alexandria made a major contribution to the life of the universal Church. The famous Catechetical School of Alexandria made an important contribution to the developing understanding of the Christian faith. Moreover, the Egyptian deserts were home to the burgeoning monastic movement of the third and fourth centuries that was to have a major influence on Christian monasticism throughout the world. And when the truth of the Christian faith was under threat from heresy, it was the great Alexandrian Fathers of the Church, such as Saint Athanasius the Great and Saint Cyril of Alexandria, who proved themselves to be defenders of the truth through their writings and their witness. 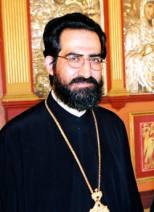 His Eminence Archbishop Sergios, Metropolitan Bishop of Cape Town since 2000.

Although the early centuries saw some missionary activity into sub-Saharan Africa with, for example, Saint Athanasius sending Saint Frumentius to evangelize Ethiopia, this was largely curtailed by the rise of Islam. It was only in the nineteenth century that Orthodox Christianity was brought to South Africa with the arrival of Greek and Cypriot immigrants, who brought a priest to come to this country at the beginning of the twentieth century, with the first church being built in Cape Town in 1904.
Our own Archbishopric of Good Hope was established in 1968 and includes areas of the Republic of South Africa south of the Vaal River – extending to the regions of the Western and Eastern Cape, the Free State, Kwazulu-Natal and the independent countries of Namibia, Swaziland and Lesotho.
We hope that this website will help inform and inspire you about the faith that we hold as a precious treasure and about the activities of our Church.

This faith, which we have received from the Church, which we preserve carefully, because, through the action of the Spirit of God, like a deposit of great price enclosed in a pure vessel, it rejuvenates ceaselessly, and makes the vessel that contains it to be rejuvenated. It is to the Church herself that the gift of God has been imparted, as the breath had been to the created man, so that all the members may partake of it and be vivified thereby; it is in her that the communion with Christ, that is, the Holy Spirit has been deposited, the Earnest-money of incorruption, a confirmation of our faith, and the ladder of our ascent to God [...]. For where the Church is, there is also the Spirit of God and where the Spirit of God is, there is the Church and all grace. And the Spirit is Truth.
St Irenaeus of Lyons